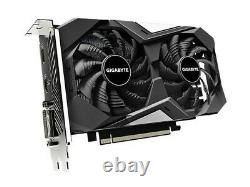 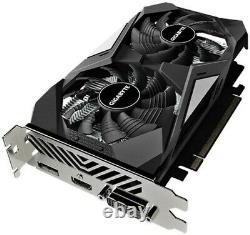 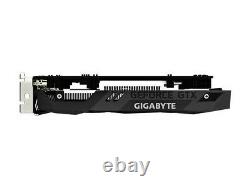 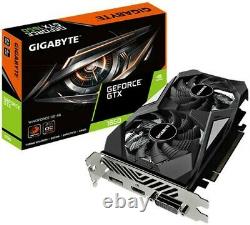 GeForce GTX 1650 D6 WINDFORCE OC 4G. The terrific budget gaming GPU, GeForce GTX 1650, now gets better with high-bandwidth GDDR6 memory. Turing shaders will unleash their full potential to let you smoothly play modern titles, without performance loss even under full load thanks to the WINDFORCE 2X cooling system. Featuring concurrent execution of floating point and integer operations, adaptive shading technology, and a new unified memory architecture with twice the cache of its predecessor, Turing shaders enable awesome performance increases on today's games. Get 1.4X power efficiency over previous generation for a faster, cooler, and quieter gaming experience. Easily upgrade your PC and get game ready with performance that's up to 2X the GeForce GTX 950 and up to 79% faster than the GTX 1050 on the latest games.

We'll handle the tech so you can focus on your passion and creation. WINDFORCE 2X cooling system features 2x 80mm unique blade fans, alternate spinning fan, composite copper heat pipe direct touch GPU and 3D active fan, together delivering an effective heat dissipation. The GIGABYTE patent "Alternate Spinning" is the only solution that can solve the turbulent airflow of adjacent fans. Since the adjacent fans rotate in the same direction, the airflow direction is opposite between the fans, which will cause turbulent airflow and reduce heat dissipation efficiency. GIGABYTE turns the adjacent fans in the opposite direction, so that the airflow direction between the two fans is the same, reducing the turbulence and enhancing the airflow pressure.

The airflow is spilt by the triangular fan edge, and guided smoothly through the 3D stripe curve on the fan surface, effectively enhancing the airflow. The 3D Active Fan provides semi-passive cooling, and the fans will remain off when the GPU is in a low load or low power game. It allows gamers to enjoy gameplay in complete silence when the system is running light or idle.

Fully automated production process ensures top quality of the circuit boards and eliminates sharp protrusions of the solder connectors seen on the conventional PCB surface. This friendly design prevents your hands from getting cut or inadvertently damaging components when making your build. The cutting edge intuitive interface allows you to adjust the clock speed, voltage, fan performance and power target in real-time according to your game's requirements.